Feel the power of the earth!
“Sanriku Geopark”, the largest in Japan

The Sanriku Geopark is the largest geopark in Japan, stretching from Hachinohe City in Aomori Prefecture to Kesennuma City in Miyagi Prefecture. The Kabushima Island – Tanesashi Coast – Hashikami region is located in the northernmost part and is home to 11 scenic spots (geosites) that have been recognized as a Japan Geopark.
It is also designated as a route for the “Michinoku Coastal Trail”, and walking along it will allow you to feel the power of the earth. Here we will introduce 11 geosites.

* The term “Geopark” is a combination of the words “Geo” and “Park”. It covers the topography and geology created by the earth’s activities, as well as the lifestyles, history, and food of people deeply related to these geological features. 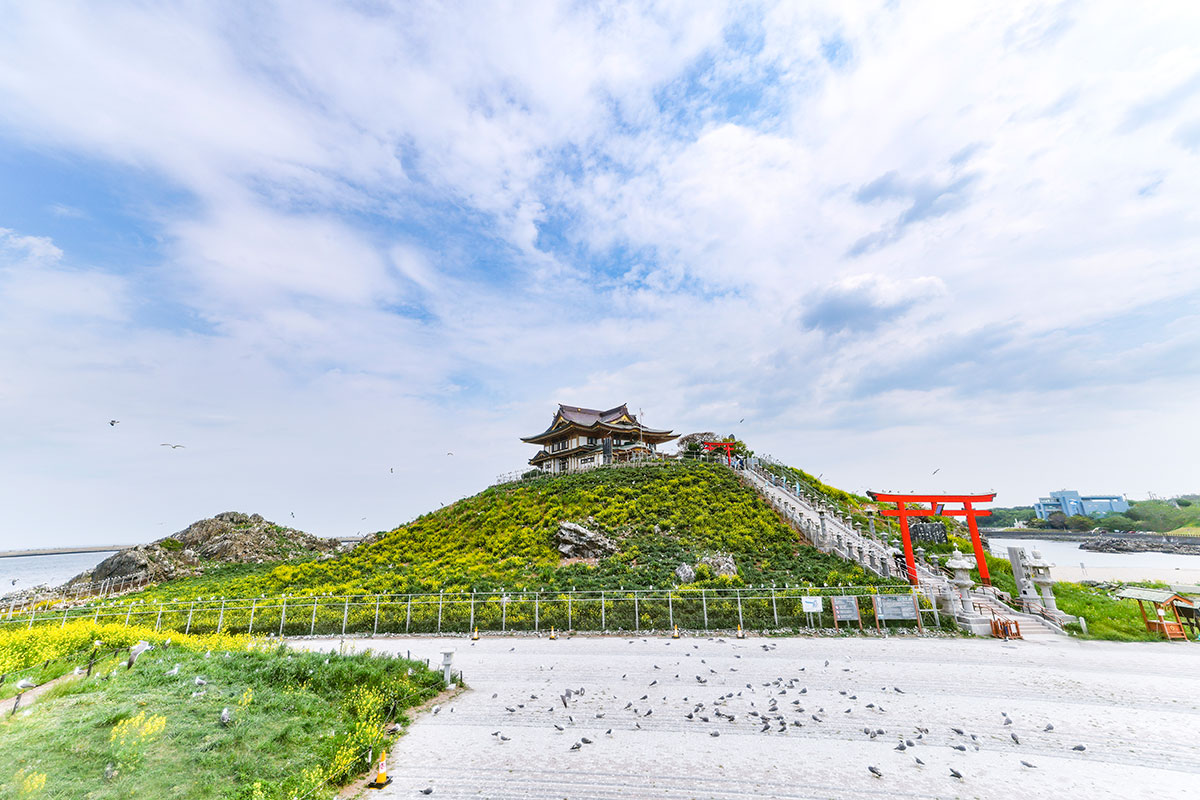 “Kabushima Island“, known as a breeding ground for black-tailed gulls is a tuff rock with a circumference of 800 meters. It was formed by volcanic ash and other deposits from undersea volcanic activity 130 million years ago.
Now that the island is connected to the mainland, visitors can get a close-up look at the nesting and rearing of black-tailed gulls, many of which breed on cliffs and remote islands. The black-tailed gulls begin to lay eggs around April, chicks hatch around May and leave Kabushima Island around August. The guardian deity of business prosperity and safety of fisheries is enshrined at “Kabushima Shrine”. The black-tailed gulls have been cherished as a messenger of the deities signaling fishing grounds.
Kabushima Island is the first in Aomori Prefecture to be designated a national natural monument. Celebrating its 100th anniversary on March 8, 2022, there is growing local momentum to consider its preservation and utilization once again. 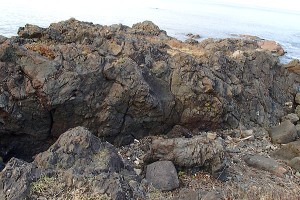 These rocks are shaped like a stack of pillows. They formed when lava flowed into the water, cooled, and solidified during undersea volcanic activity 130 million years ago. It can be seen around “Ebisuhama Fishing Harbor” near Kabushima Island. 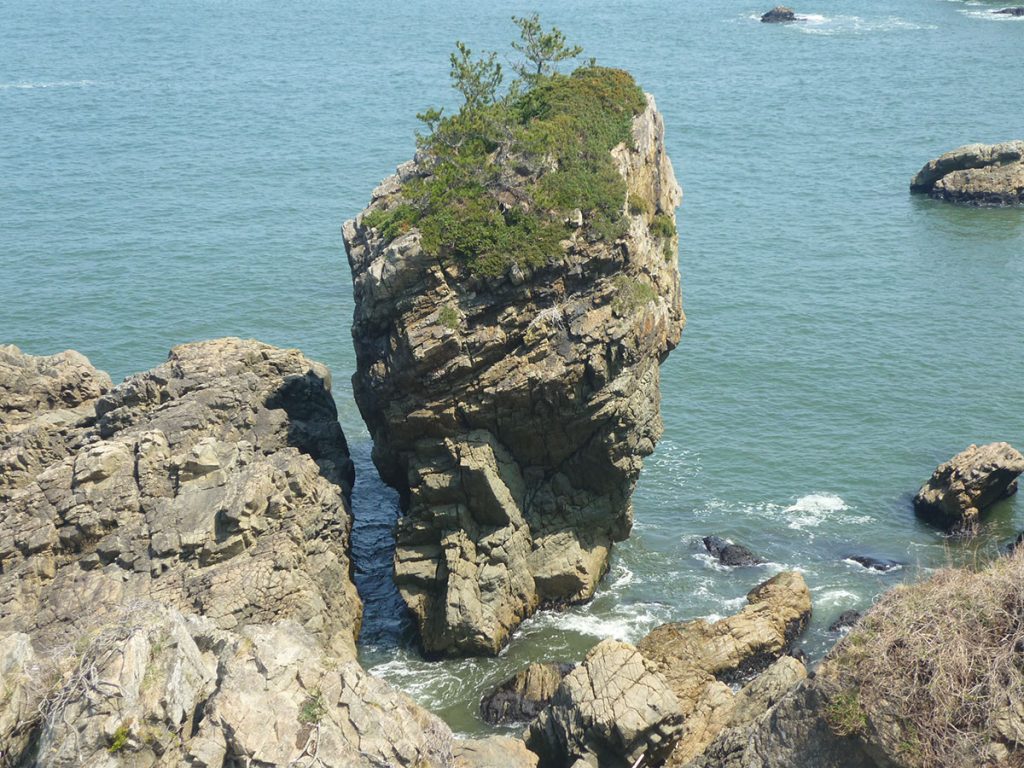 Andesite is formed from magma, and the orderly cracks are a phenomenon called “joints”. These joints are created when the rock’s volume decreases as it cools and solidifies. Gradual erosion by the waves has caused it to tower above the sea. It is said to have been named after an itako, a spiritualist who lived in this area that was said to have danced at sunrise to forecast the day’s catches.

Geosite 4
“Singing sand”, the sound made by minerals 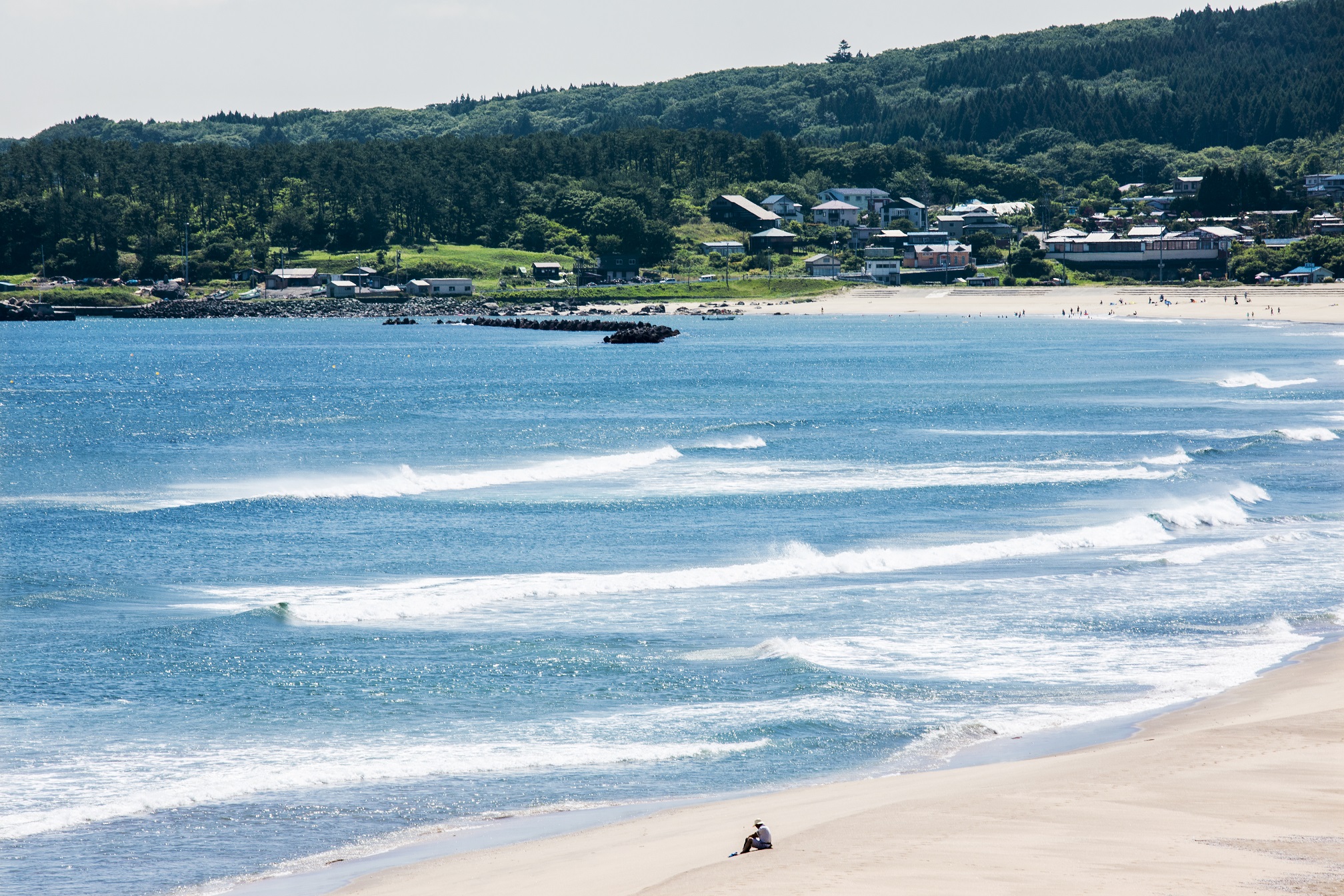 The white sandy beach of Osuka Coast, which stretches for about 2.3 km, is called “Naki-suna” or singing sand for the sound it makes when you step on it. The sound is created by the friction of quartz grains, a mineral mixed in the sand, and is said to be a sign of a clean beach with few impurities. Today, it is said that only very limited beaches in the country produce this sound. “Osuka coast” has been selected as “one of the top 100 beaches in Japan”. Although swimming is prohibited, visitors can walk barefoot on the beach, and the Shirahama swimming beach, complete with showers and changing rooms, is located nearby. 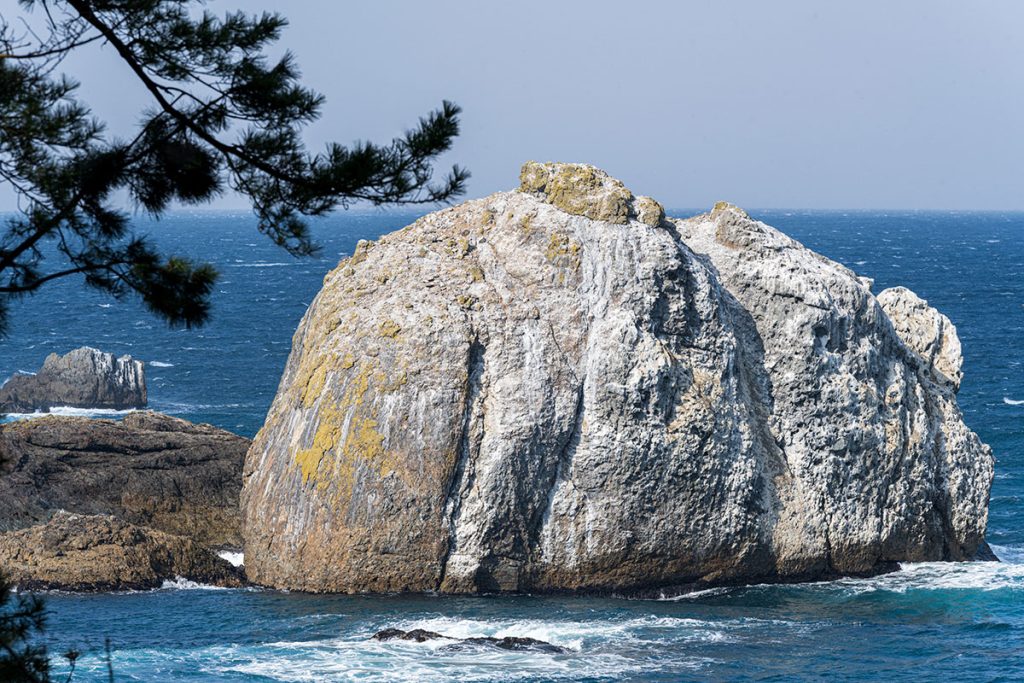 Approximately 20 meters in height, the “Shiraiwa” (white rock) is also a tuff breccia rock formed from volcanic ash, rock fragments, and other materials.
The scattered holes are caused by fallen rubble, in which the endangered Japanese cormorants build their nests. It is called Shiraiwa (white rock) owing to the whitening of the rock surface caused by seabird droppings. 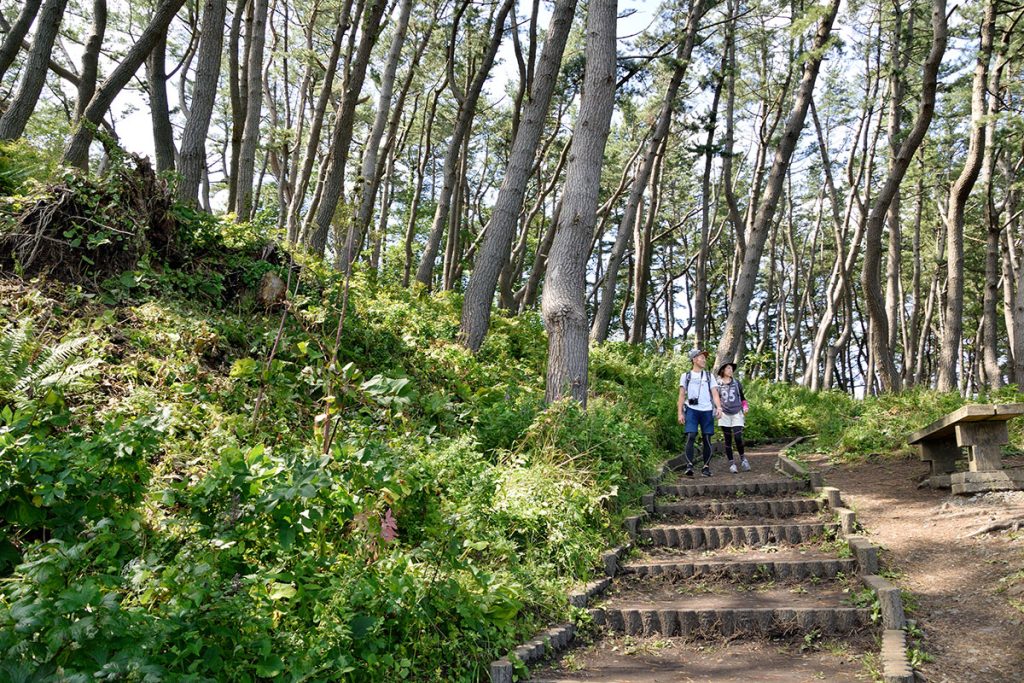 “Yodo-no-Matsubara” Pine Grove was planted by a local youth group to encourage fish breeding. A 3 km-long forest of black pine trees more than 100 years old is maintained along the walking trail. There is the “Hermit Cave”, where some liked the view so much that they took up residence here, the “Bat Hole”, where bats used to live, and the “Hell Hole” which is said to be connected to Miyako City in Iwate Prefecture.

Geosite 7
“Tanesashi Natural Lawn” where the seafloor was uplifted 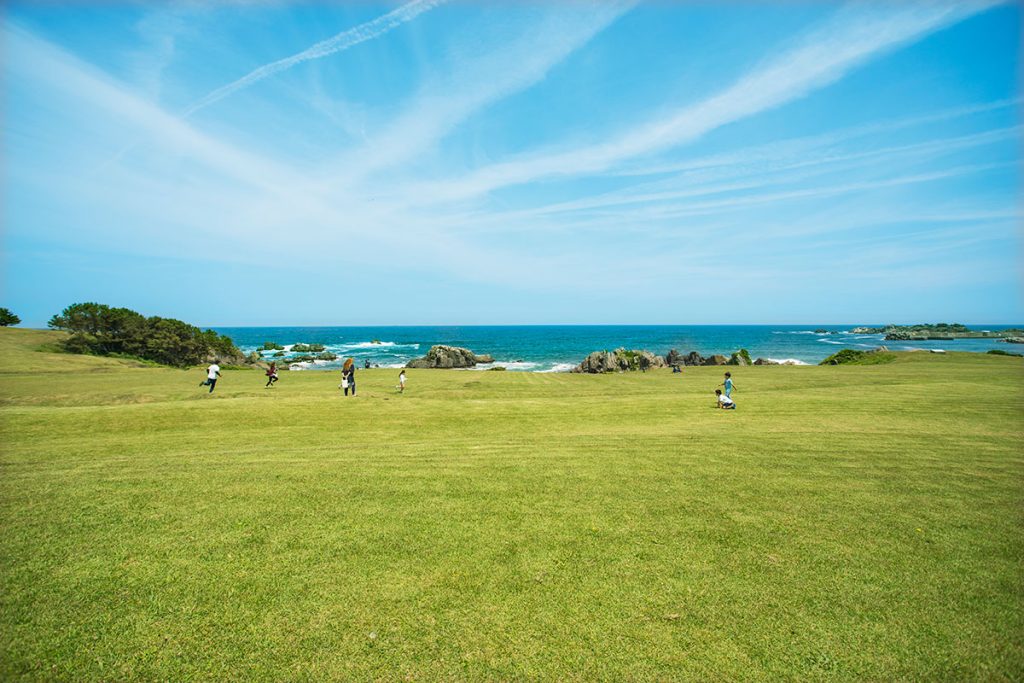 The “Tanesashi Natural Lawn” which stretches to the edge of the sea, is part of the grassland that was formed for horse grazing. “Marine terraces” were formed by wave erosion of the seafloor, and then appeared on the surface due to fluctuations in sea level and uplifting of the seafloor. The distinctive environment of grazing, sea breezes, wetlands, and rocky areas have created a unique ecosystem that nurtures more than 650 species of coastal and alpine plants.

Kabushima Island – Tanesashi Coast – Hashikami Coast regions where you can feel the earth’s breath. The Tanesashi Coast Information Center, located in front of the Tanesashi Natural Lawn, has a wealth of exhibits introducing nature in the area and also offers hands-on experience programs. With restrooms, a parking lot, and a café next door, this place can be used as a resting spot. It can also be used as a base for enjoying the Sanriku Geopark. 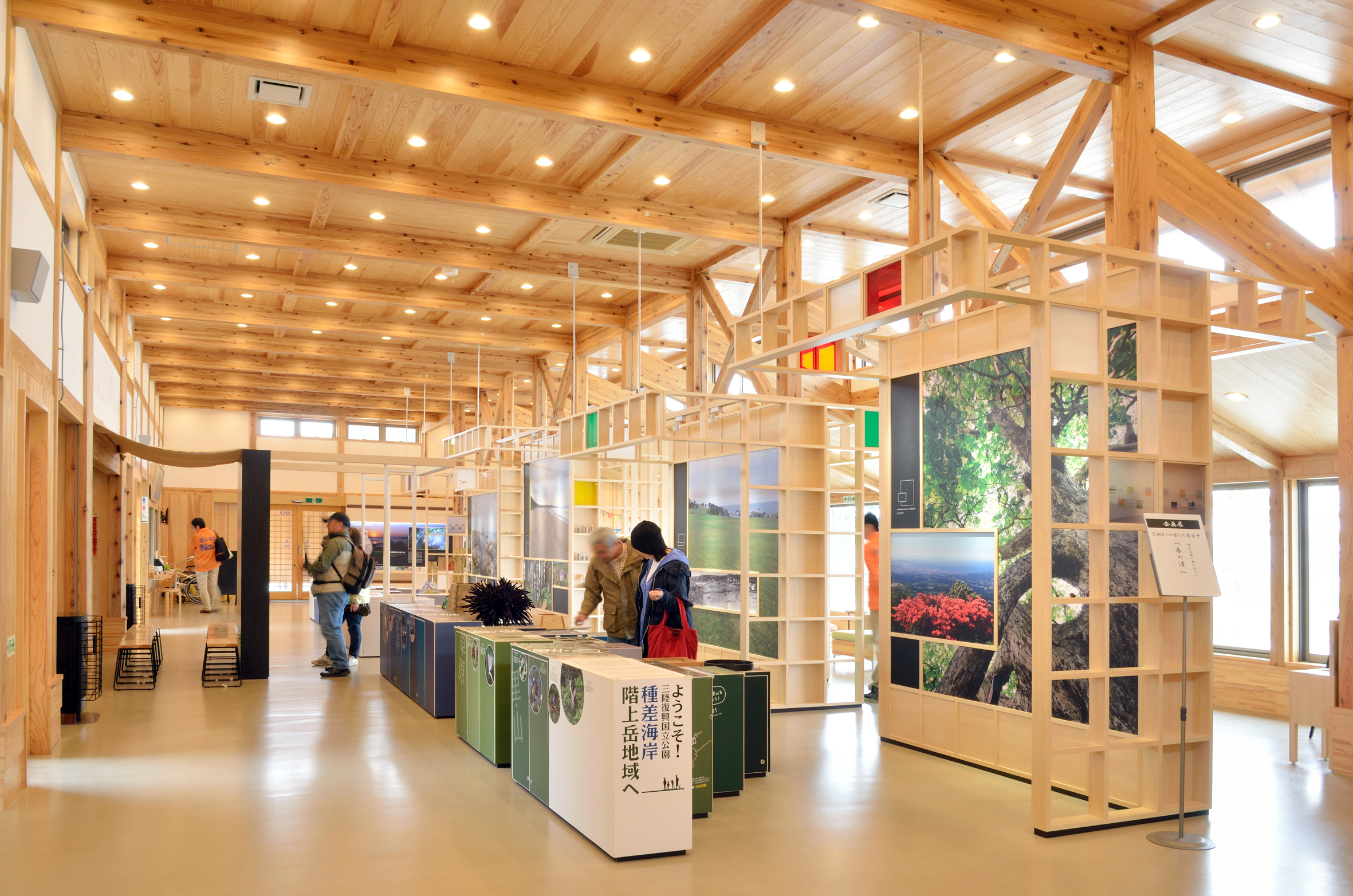 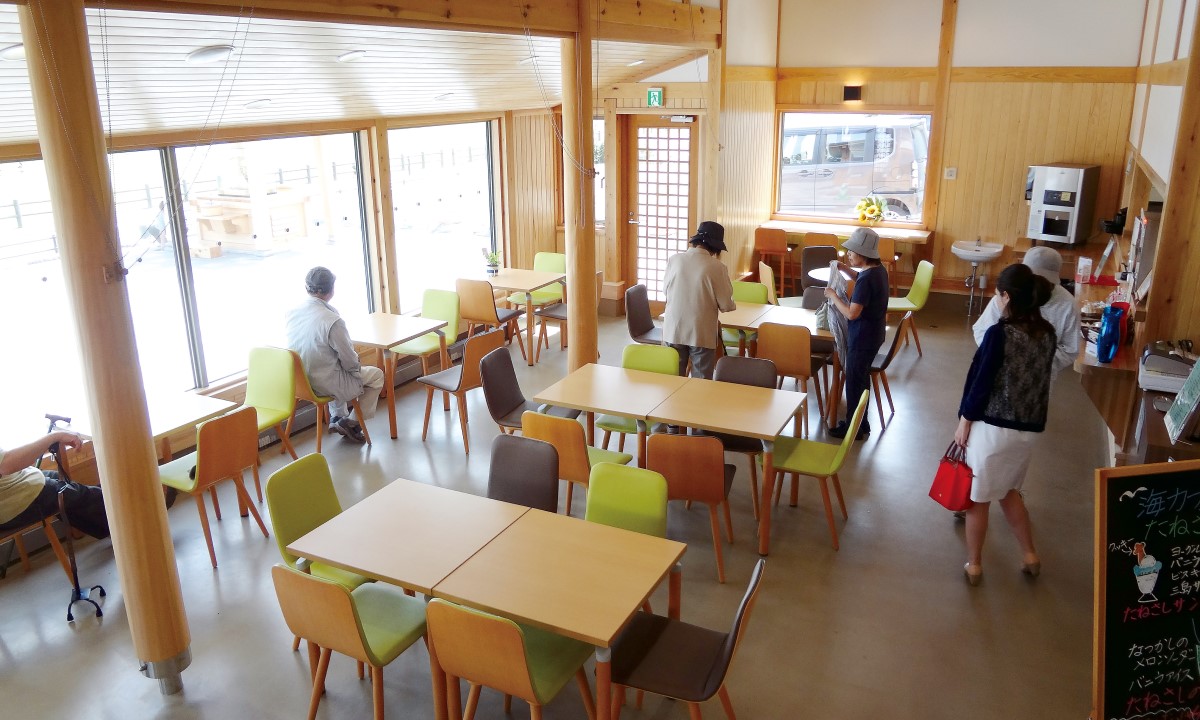 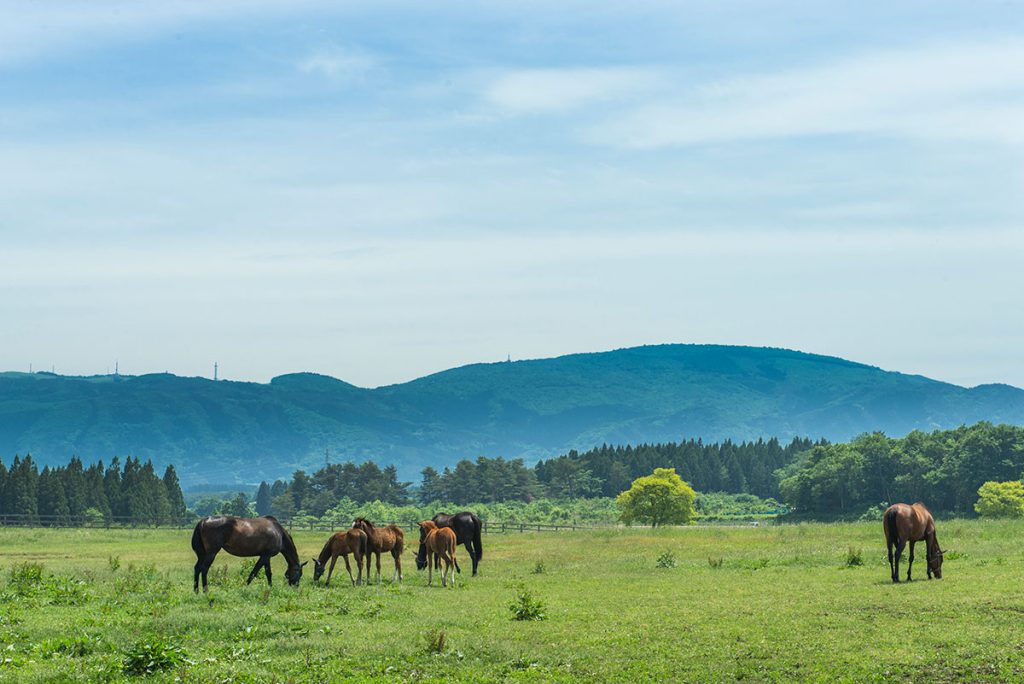 “Mt. Hashikami” also known as “Gagyu-zan”, as it looks like a cow lying down, is made up of igneous rocks, mainly “granodiorite”. You can drive up to the eighth station “Obirakitai”, and from there it is about a 30-minute walk to the summit. At the summit, you can see the Hakkoda mountain range and the Pacific Ocean, and spring water can be found at the summit which is said to be rare. It is called “Ryu-jin-sui” (dragon god water), and the god of water (Ryu-jin dragon god) is enshrined here.

Geosite 9
“Terashita Waterfall” that flows between the granite rocks

“Terashita Kannon” is located on the eastern foot of Mt. Hashikami. It is the first temple on the Oshu-Nanbu-Nukanobu’s 33 temple pilgrimage route (Nukanobu is the general term for the northern part of Iwate Prefecture and the eastern part of Aomori Prefecture since the late Heian Period). The “Terashita Waterfall” flows between the granite rocks, and the river bed is covered with weathered granite sand. The area is also home to Ushioyama Shrine and the Kannon Hall, which is said to have been built in the Kamakura period. 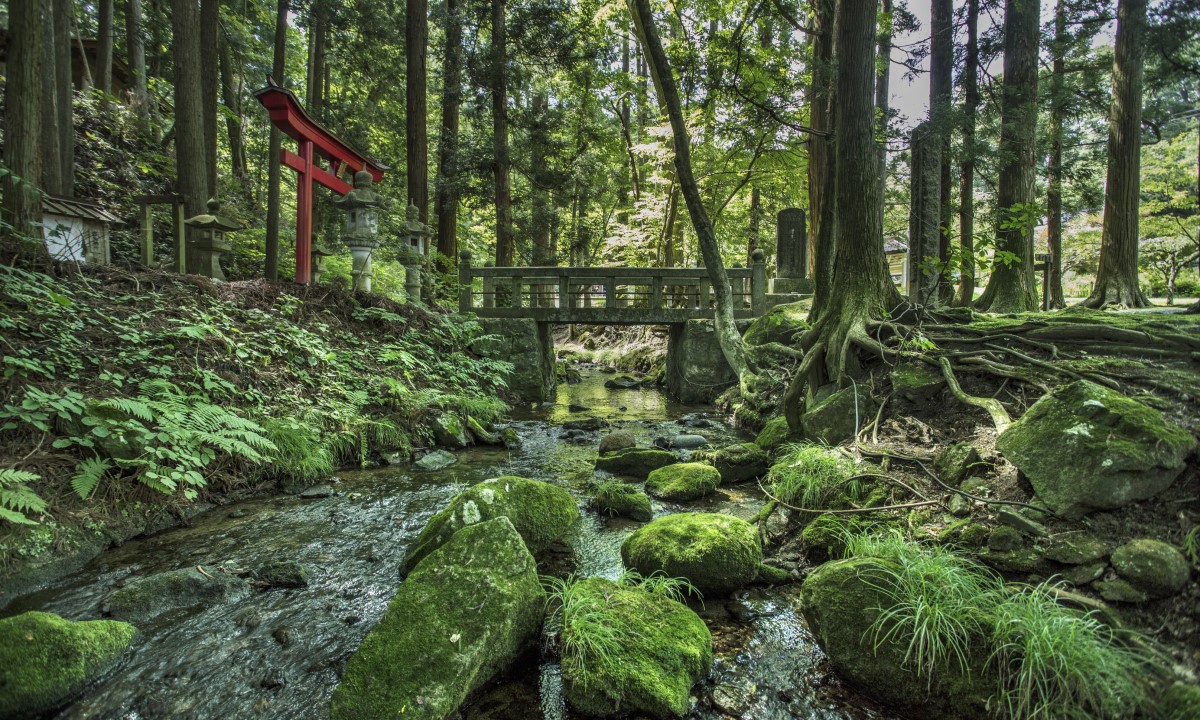 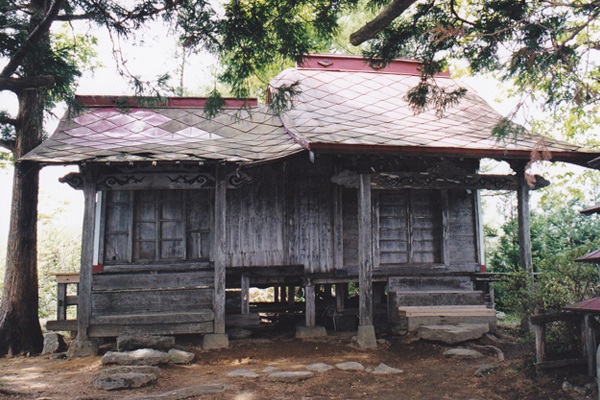 A 30-minute hike along the mountain trail from Terashita Kannon will take you to the ruins of Tomyo-do, said to be one of the oldest lighthouses in Japan. It is said to have been constructed in 1729 to pray for the safety of ships sailing near the Kominato Cape. 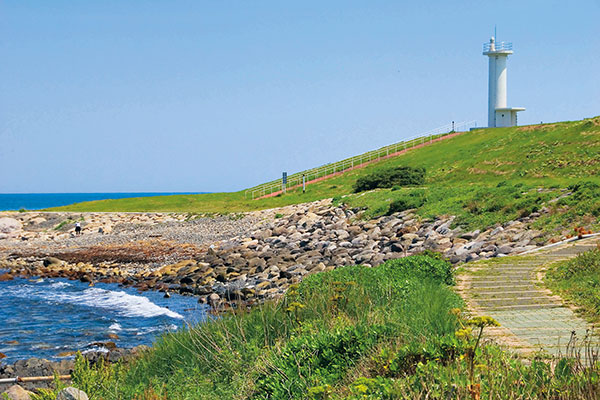 The topography around the Hashikami Coast is formed by “Hashikami Marine Terraces” approximately 10 to 30 meters high, from the shallow rocky reefs of “Oja Coast” to the natural lawns of “Kominato Coast”. This varied coastal terrain fosters marine resources such as sea urchin, abalone, and flatfish, which are local specialties. In late July, the “Ichigoni Festival” is held, featuring the local dish “Ichigoni” (soup made with sea urchins and abalones).