place
local_offer
“Mt. Hashikami” is part of the Sanriku Fukko (reconstruction) National Park, and also known as “Gagyu-zan”, as it looks like a cow lying down. There are only a few mountains along the southern coast of Aomori Prefecture, and although they are not high in altitude, they are well known in the region as mountains that can be climbed throughout the year. There are several routes to climb the mountain. In particular, we recommend the 2.5-hour route, suitable for children for their mountain climb debut. You can also, drive up to the eighth station, and from there it is a 30-minute walk to the summit.
You can enjoy local specialties such as soba noodles and gelato at Forest Pia Hashikami located just before the trailhead.
The highlight of Mt. Hashikami is the rhododendron azaleas at its best from late May to early June, at the eighth station “Obirakitai”. Approximately 20,000 plants grow wild in this colony. It is said that cattle and horses used to graze here, and the azaleas that the cattle did not eat, remained. A gentle path from here leads to the summit. 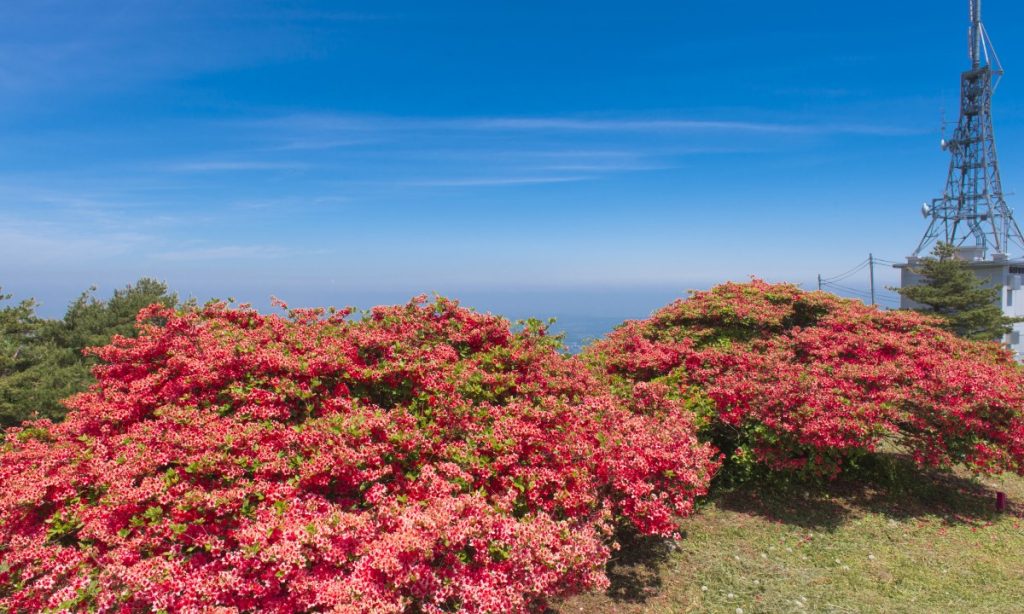 At the summit is the prefectural border, where you can see the Hakkoda mountain range and the Pacific Ocean on the Aomori side, and the Kitakami Mountains on the Iwate side. One of the unique features of the mountain is the spring water found at the summit which is said to be rare. It is called “Ryu-jin-sui” (dragon god water), and the god of water (Ryu-jin dragon god) is enshrined here.
From the trailhead to Obirakitai, the route is lined with broadleaf forests, with occasional views of the mountain stream. A walk along the mountain path full of negative ions is sure to refresh you. Ishinokura observation point located near the seventh station provides a panoramic view of the Hakkoda mountain range and Hachinohe City. Look out for the huge granite rock. As you descend from the summit in the direction of “Terashita”, you will find “Terashita Kannon” which refers to the area at the base of the sacred mountain, that collectively includes the “Kannon Hall”, the “Ushioyama Shrine”, and the “Terashita Waterfall”. It is the first temple on the Oshu-Nanbu-Nukanobu’s 33 temple pilgrimage route (Nukanobu is the general term for the northern part of Iwate Prefecture and the eastern part of Aomori Prefecture since the late Heian Period) and has been regarded as a place of pilgrimage since the ancient times. In the temple grounds, there are huge and old ginkgo and silky wisteria trees, as well as a Kanetsuki-do bell tower, where it is said, it will bring you good luck if you place your head beneath the bell and ring it.

The mountain path that ascends from Terashita Kannon to the “Tomyo-do” (sacred lantern hall) at the summit of Mt. Hashikami takes about 30 minutes, and a relaxing walk is recommended. The Tomyo-do is said to be one of the oldest lighthouses in Japan and was built to pray for the recovery of smallpox and the safety of ships at sea for the lord of Hachinohe Domain.

A variety of guided tours are available in this friendly national park, so you can feel the power of the mountains that have been worshipped by the local people.